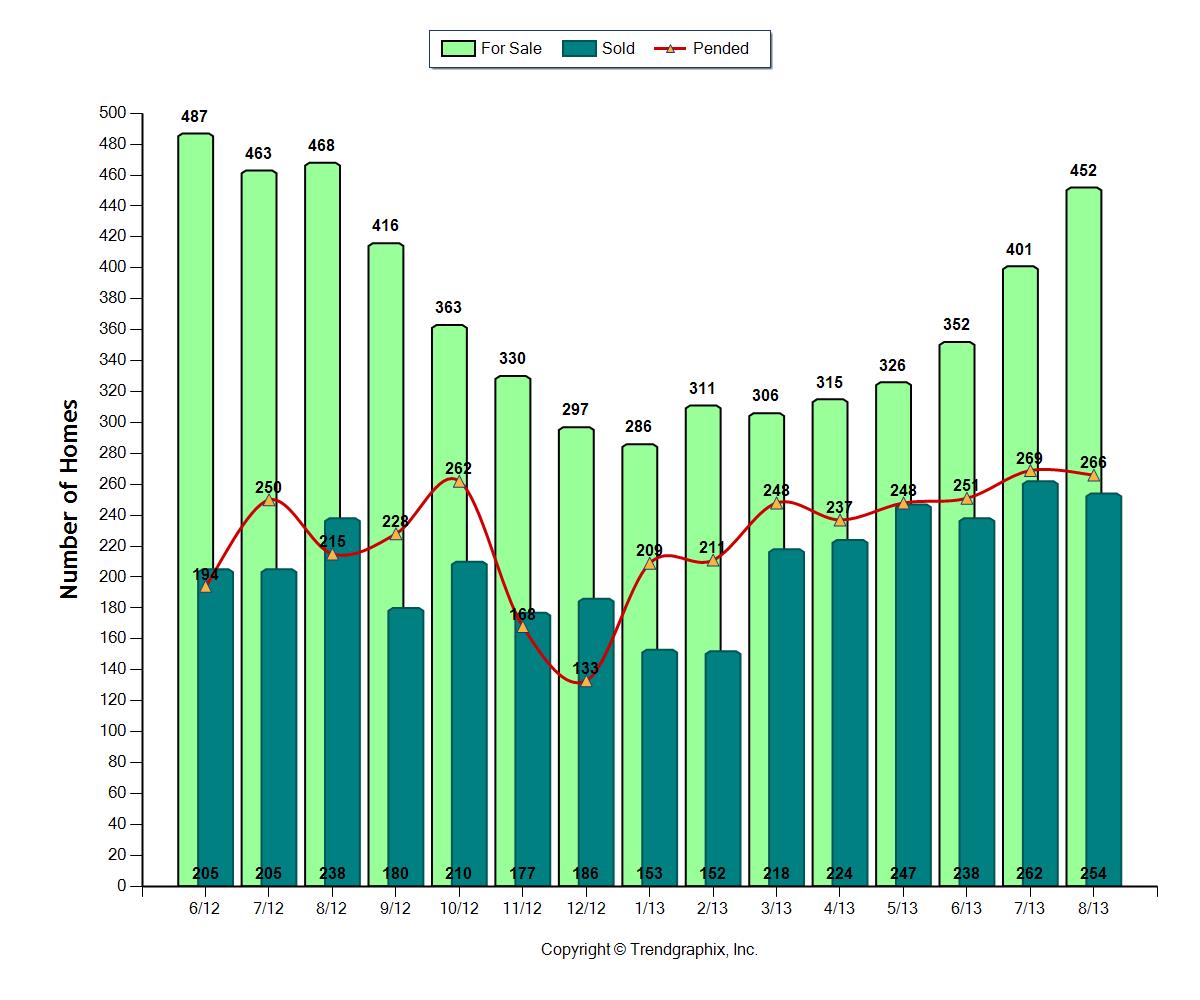 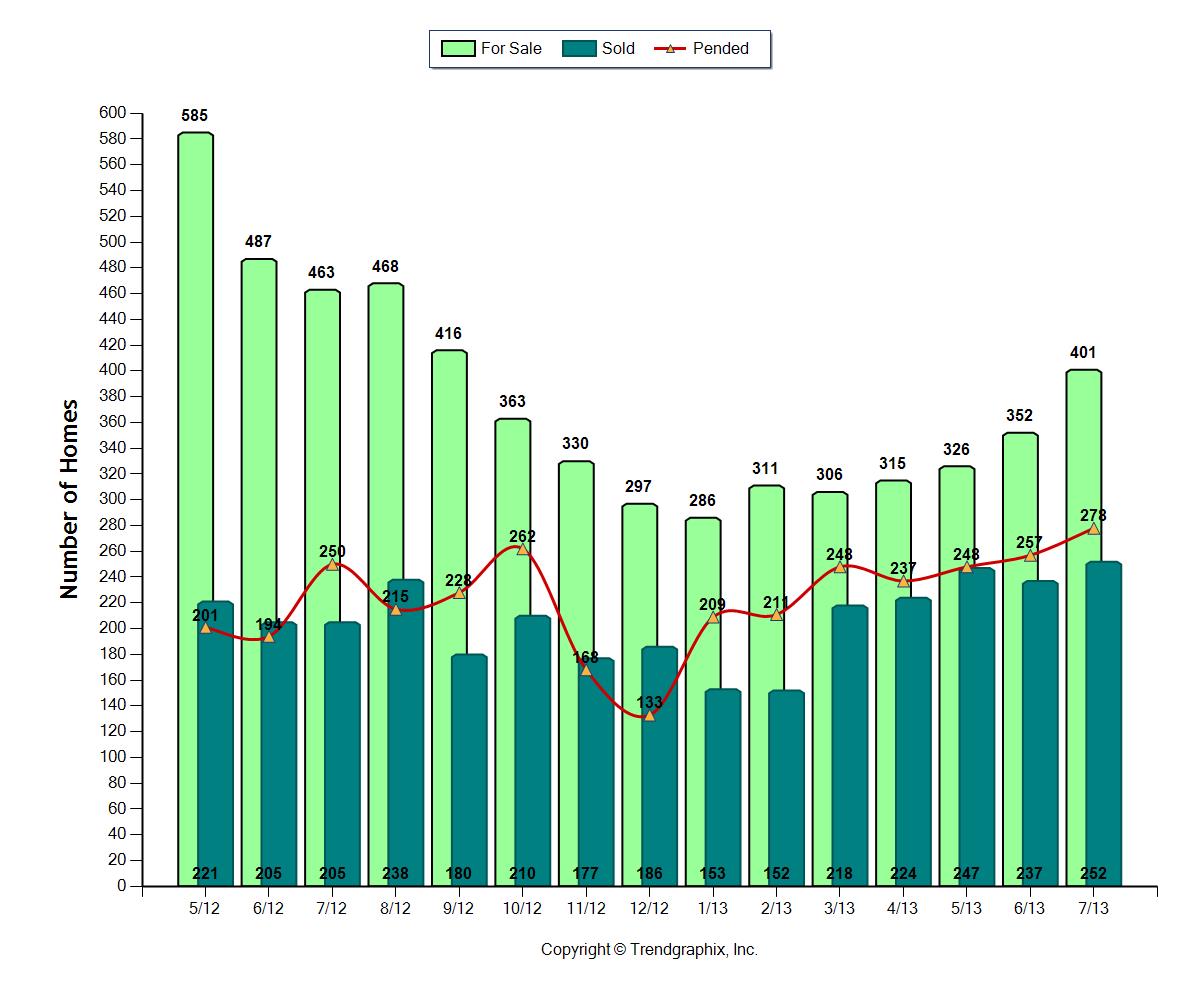 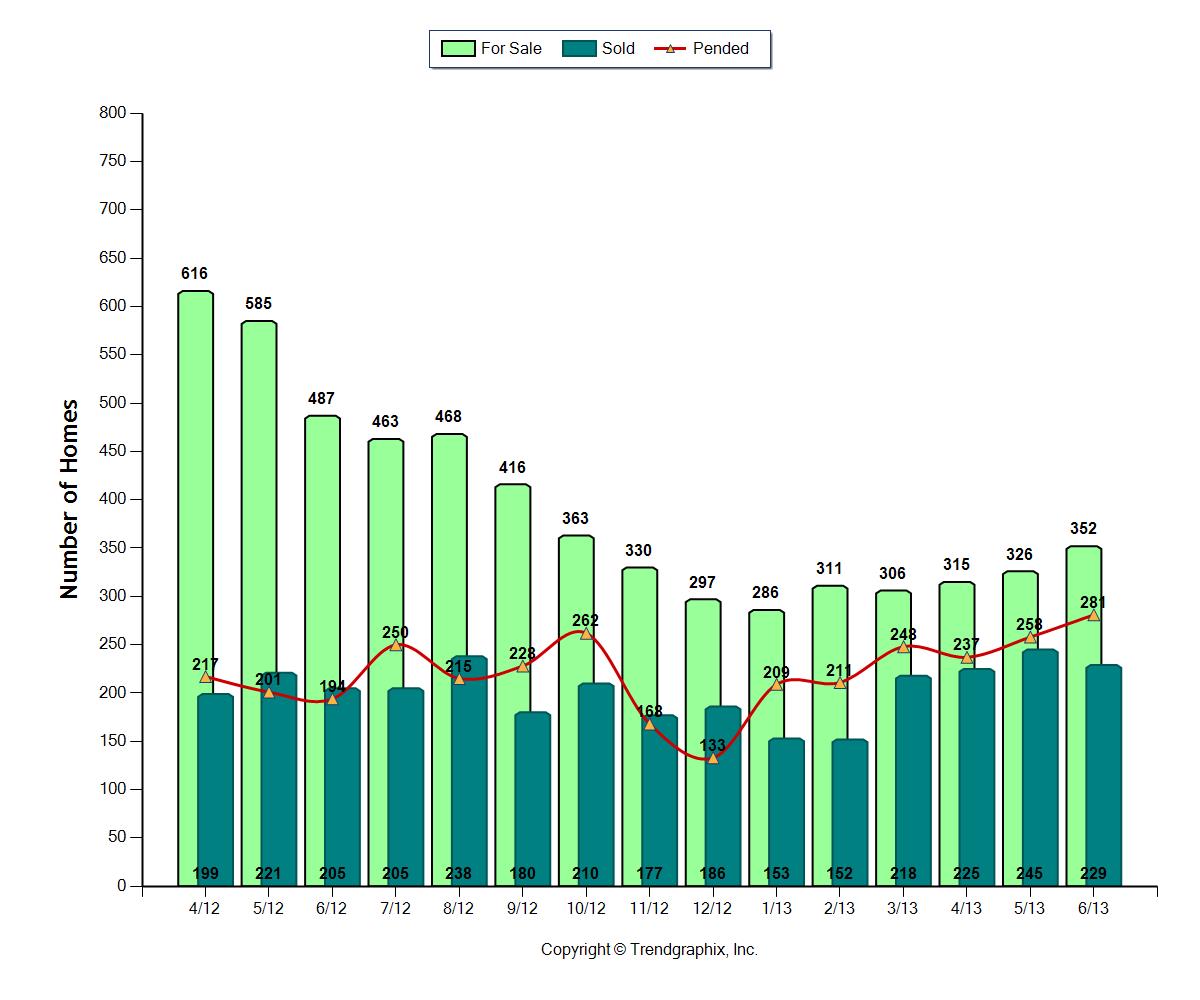 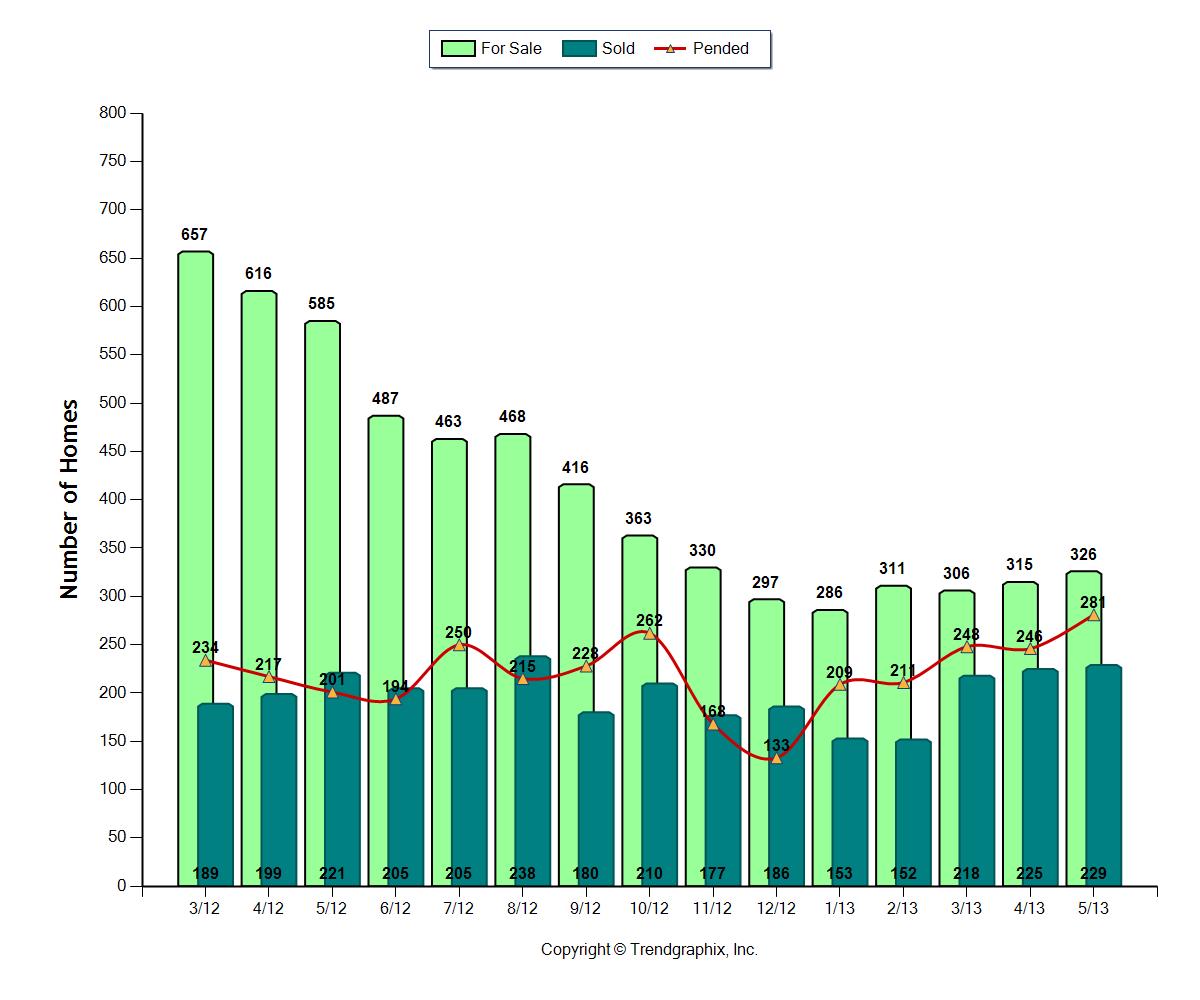 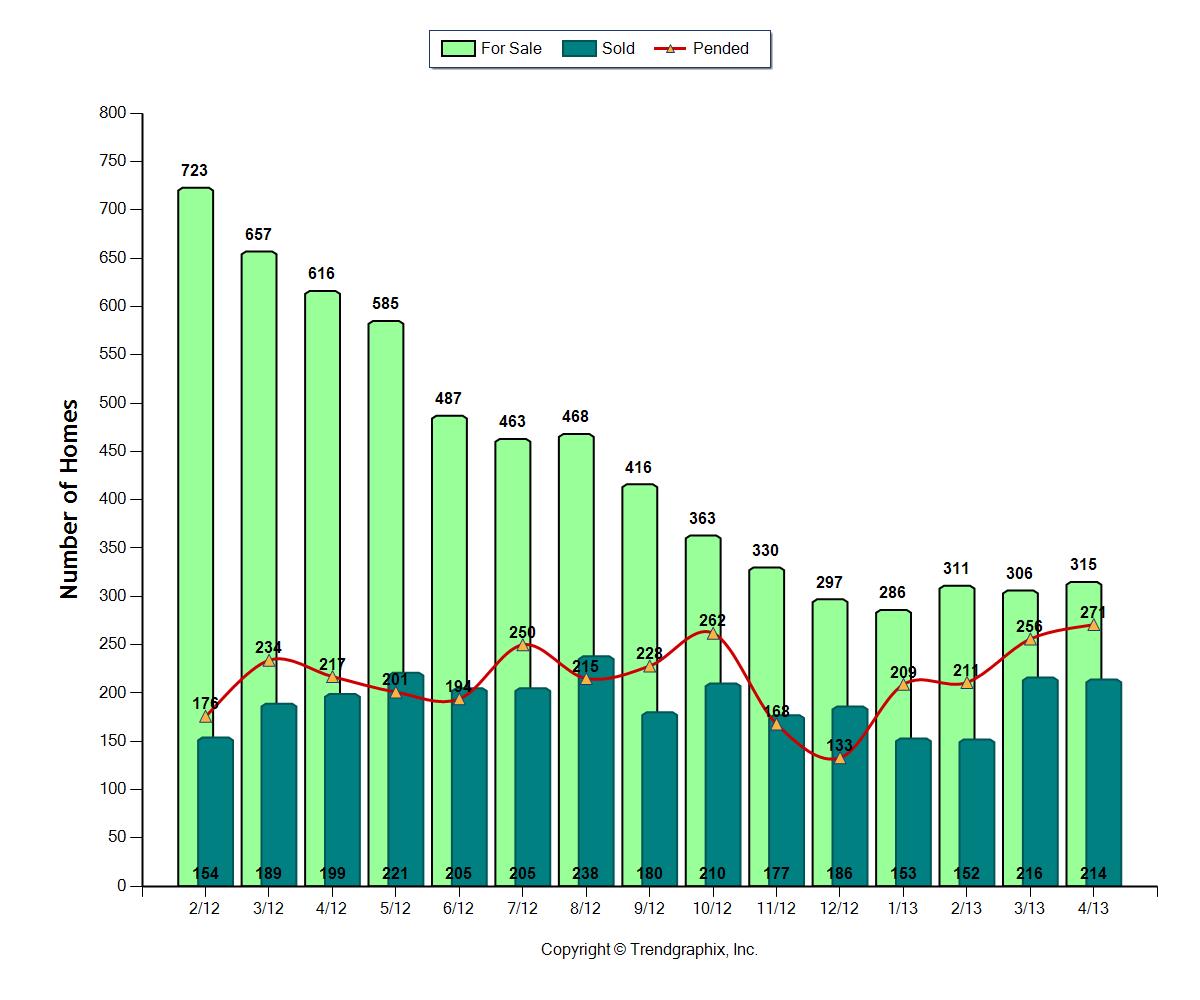 Condos on Seattle's Eastside are still hot!  There's been a negligible increase in supply, while the number of sales have increased.  In April, 86% of the available condos sold, so the fantastic market continues for condo sellers.  Since condo owners suffered the most during the downturn, it's great to see the market improve for them.

We're starting to push up to the higher $200+ price median price, so prices are creeping higher.  We expect that to continue.

The Seattle-Eastside Condo Market is Back! 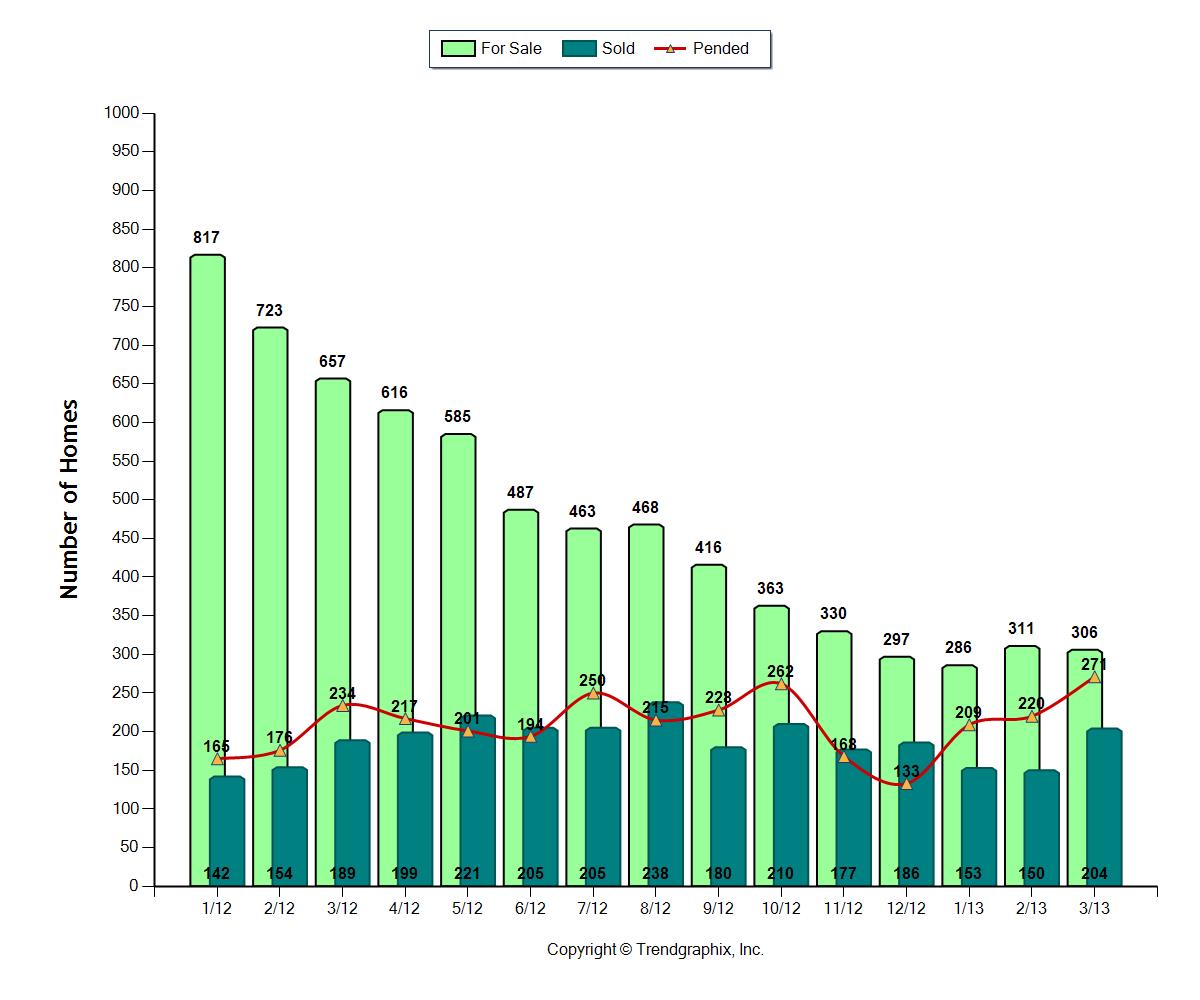 The condo market has come roaring back!  Seattle-Eastside Condo sales are skyocketing!  About 89% of the condos for sale in March sold!   Harder hit than single family resales, it's fabulous news for those condo home owners who were so battered by the real estate downturn.

Since almost every condo for sale this past month sold,  now is a great time to sell.    Buyers continue to look for good condos to buy.  With the competition at an almost all time low, the chance of selling your condo has increased dramatically.  Last year at this time, there were about twice as many condos for sale.  A third of those condos sold, but today, almost all the condos for sale are sold.  It's a huge difference from last year.

The Seattle-Eastside Condo Market is Steady and Strong! 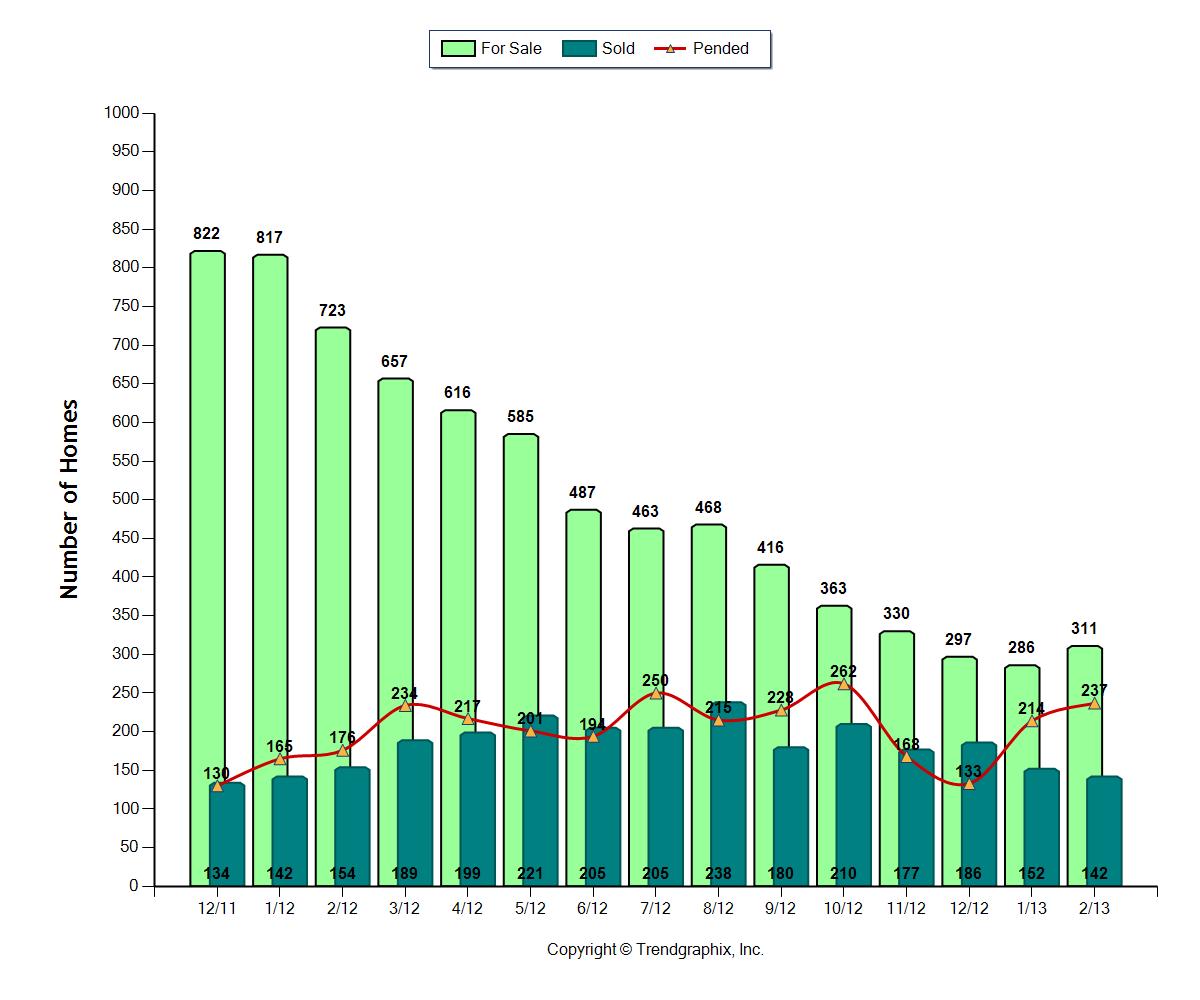 A few more condos for sale and a few more sales in February than in January!    We crossed the threshold and are now back at over 300 condos for sale, the first month since last November.  There were 311 condos for sale with 237 or 76% of them selling.   The January pace of condos sales held steady into February.

Median pricing increased from $181,000 in February, 2012 to $247,000.  Seattle-Eastside condo owners can be assured that median pricing for condos is firmly established in the mid $200,000's, since this has been the median price point since last May.  How much higher prices will go depends on the supply and demand.  If our supply remains low, as it has been for many months, and the demand remains high, expect the median price to increase.

The majority of condos that sold in February were priced under $350,000.

Buyers continue to look for good condos to buy.  With the competition at an almost all time low, the chance of selling your condo increases dramatically.  If you're thinking of making a move, now is a great time to do so. 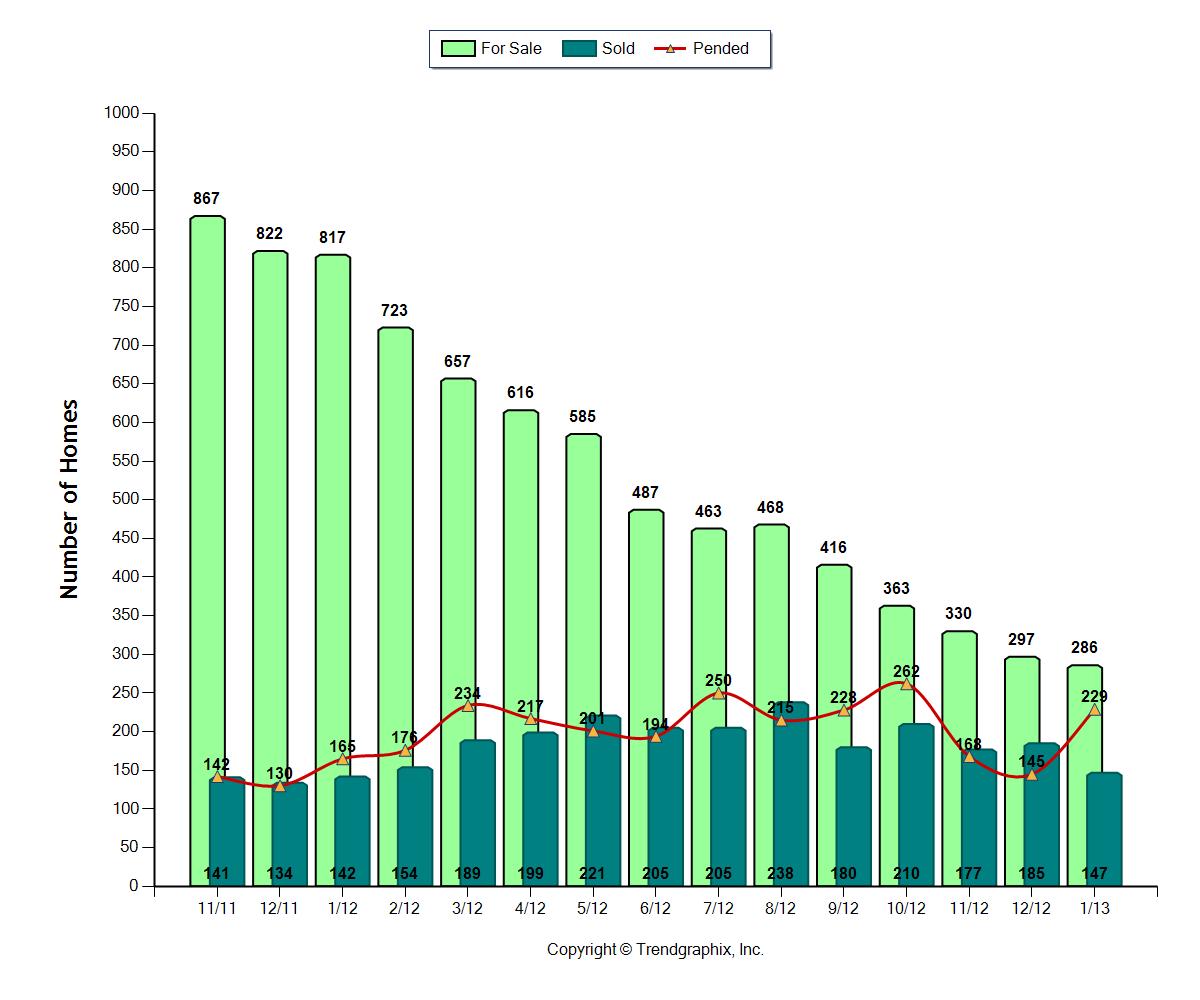 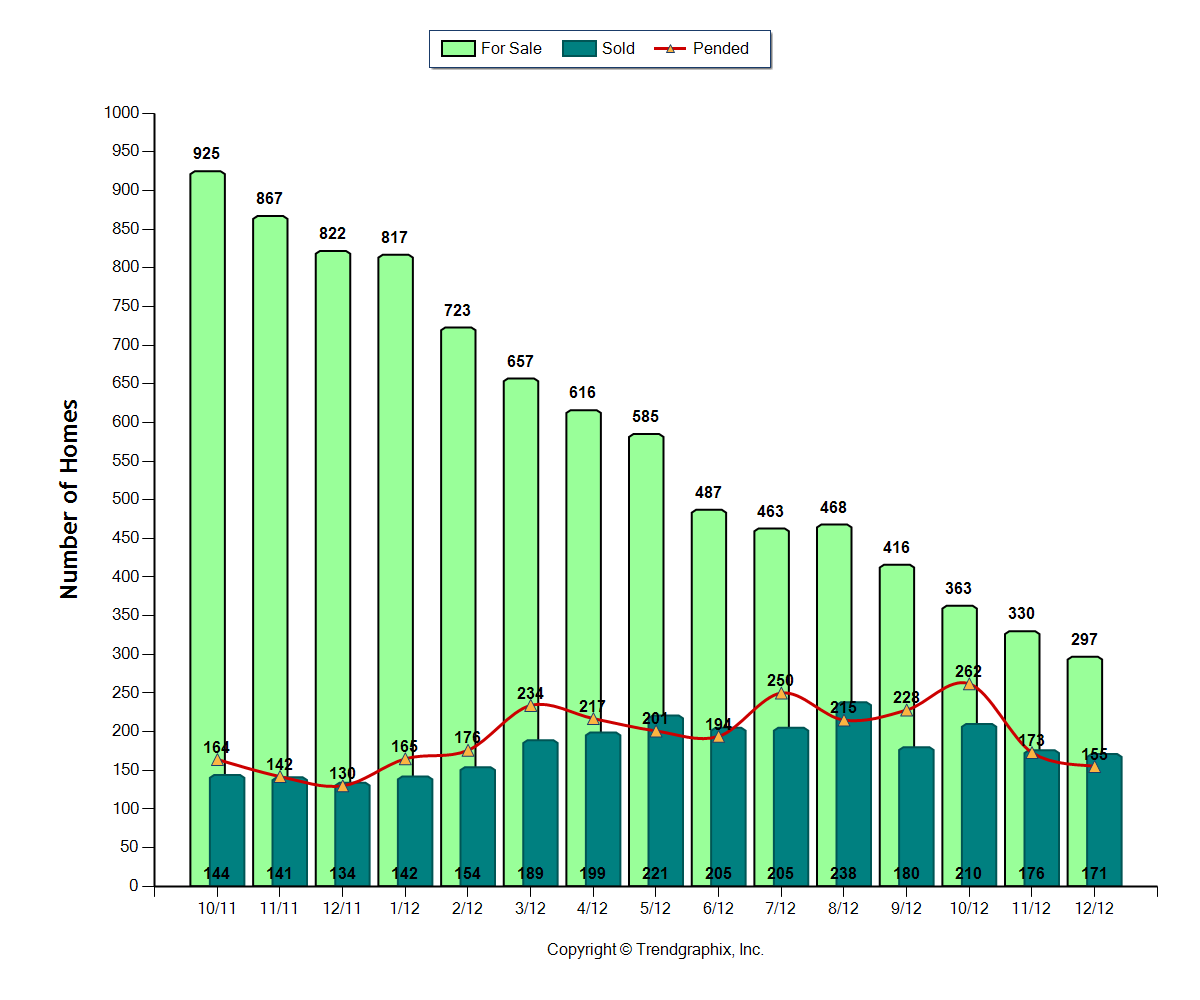 Will there be any condos available to buy on Seattle's eastside in 2013?   I asked this question last month.  We won't have the statistics for January until the end up the month, but there were just a few for sale, and I mean just a few, in December.  There were fewer than 300 condos for sale!  I expect January numbers to be pretty low, too.

Condo sales are definitely out of the slump of 2008-2011.  Prices are now starting to go up more condos are selling with less on the market.  In 2008, the average number of condo sales per month was 168 sales.  This year, there were 205 condos that sold on average each month.

The past few years Seattle's eastside real estate has not followed the yearly trends we used to experience.  Traditionally, there were booming spring sales, slow summers and a slight uptick in the fall.  The busiest month for condo sales last year was in October, when 260 condos sold.   The smallest number of condos that sold was in December, the month with the fewest condos for sale.  There was consistent sales activity each month of 2012, while the number of condos for sale dropped drastically.

So will there be any condos for sale in 2013?  Stay tuned to next month's update!  Given the fact there are so few condos for sale, if you plan to make a move this year, now would be the time.  With the competition at an almost all time low, the chance of selling your condo increases dramatically.

Will There Be Any Condos to Buy on Seattle’s Eastside in 2013? 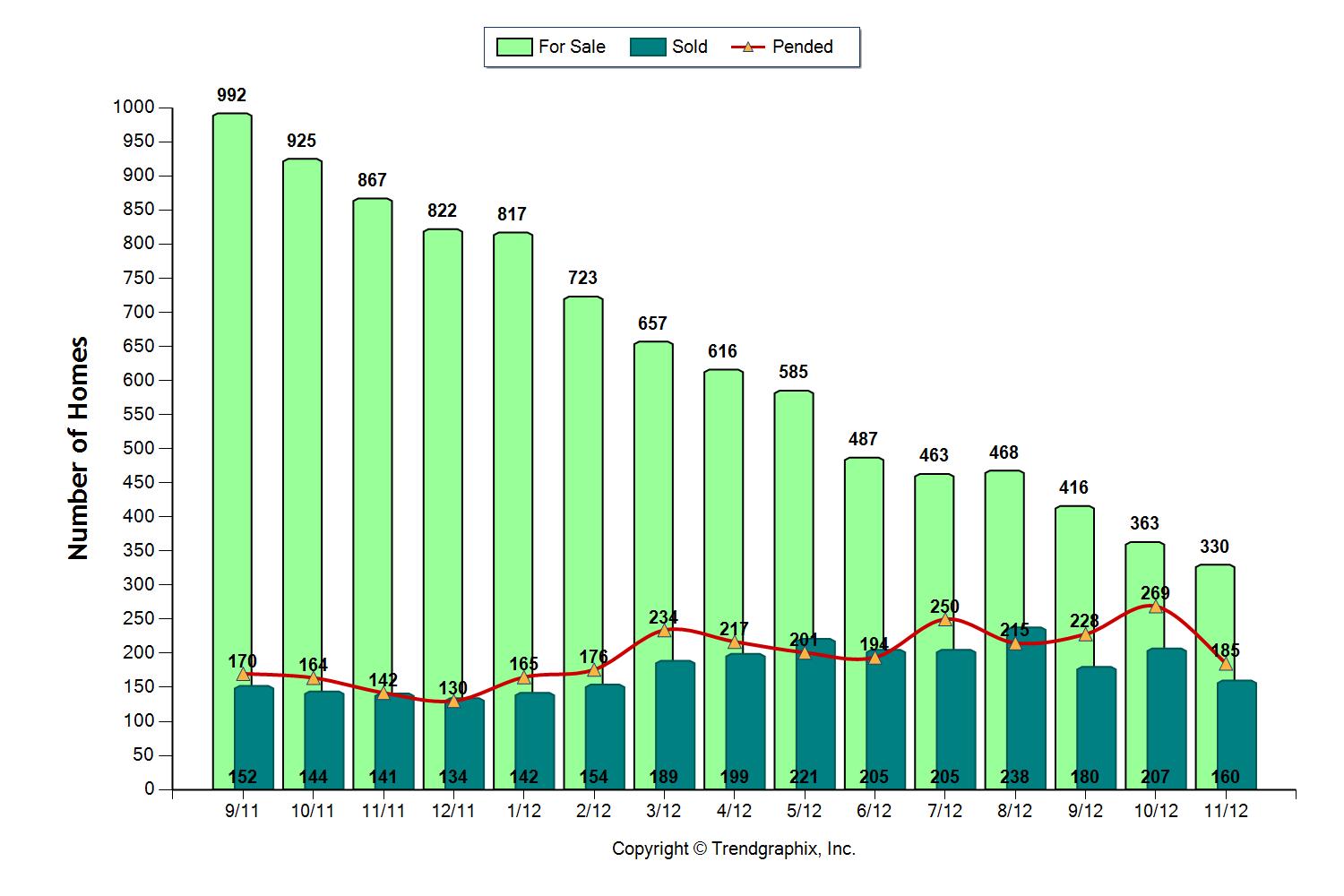 Will there be any condos available to buy on Seattle's eastside in 2013?  If we look at the chart, it sure looks like the number of available condos could disappear!   Right now, if no more condos were to come on the market, it would take less than 2 months to sell those currently available.    We really expect condos to be on the market next year, but it's clear we'll start out with little for sale.

The number of condos for sale in Bellevue, Kirkland, Issaquah, Redmond, Sammamish and other eastside cities has been cut in half since March of this year.  That's a huge drop in a short amount of time.

Not as many condos sold this past month when compared to other months of this year.  However, because the number of condos for sale is so small, 56% of the condos on the market sold last month.

We do expect the number of condos for sale to stay low in 2013 as many are still hoping to recover some of the value of their condos before making a move.

Stay tuned to the first of the year, which is just around the corner.  We'll do a wrapup of this year's condo sales on Seattle's eastside.

Have a great New Year!