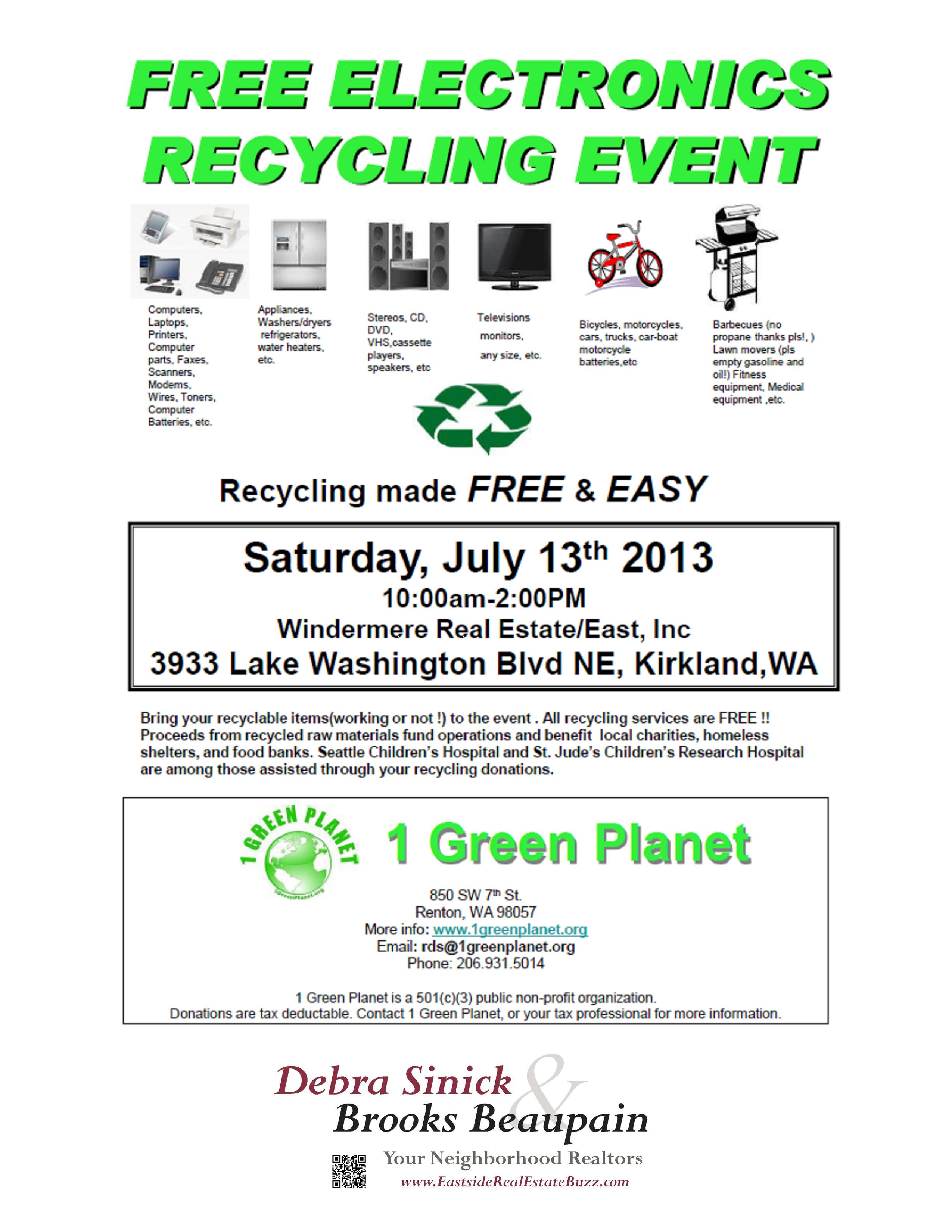 Got piles of important documents you no longer need to keep?  Have you been meaning to dispose of these documents, but haven’t had a chance to do so? This weekend at my Windermere Real Estate office in Kirkland, you’ll have the opportunity to dispose of all your outdated documents responsibly and safely.

I’m heading off to my garage now to look through some boxes of old files. I know I have boxes of documents that can go.

If you’re concerned about how long you should keep certain documents, take a look below.  Happy shredding! 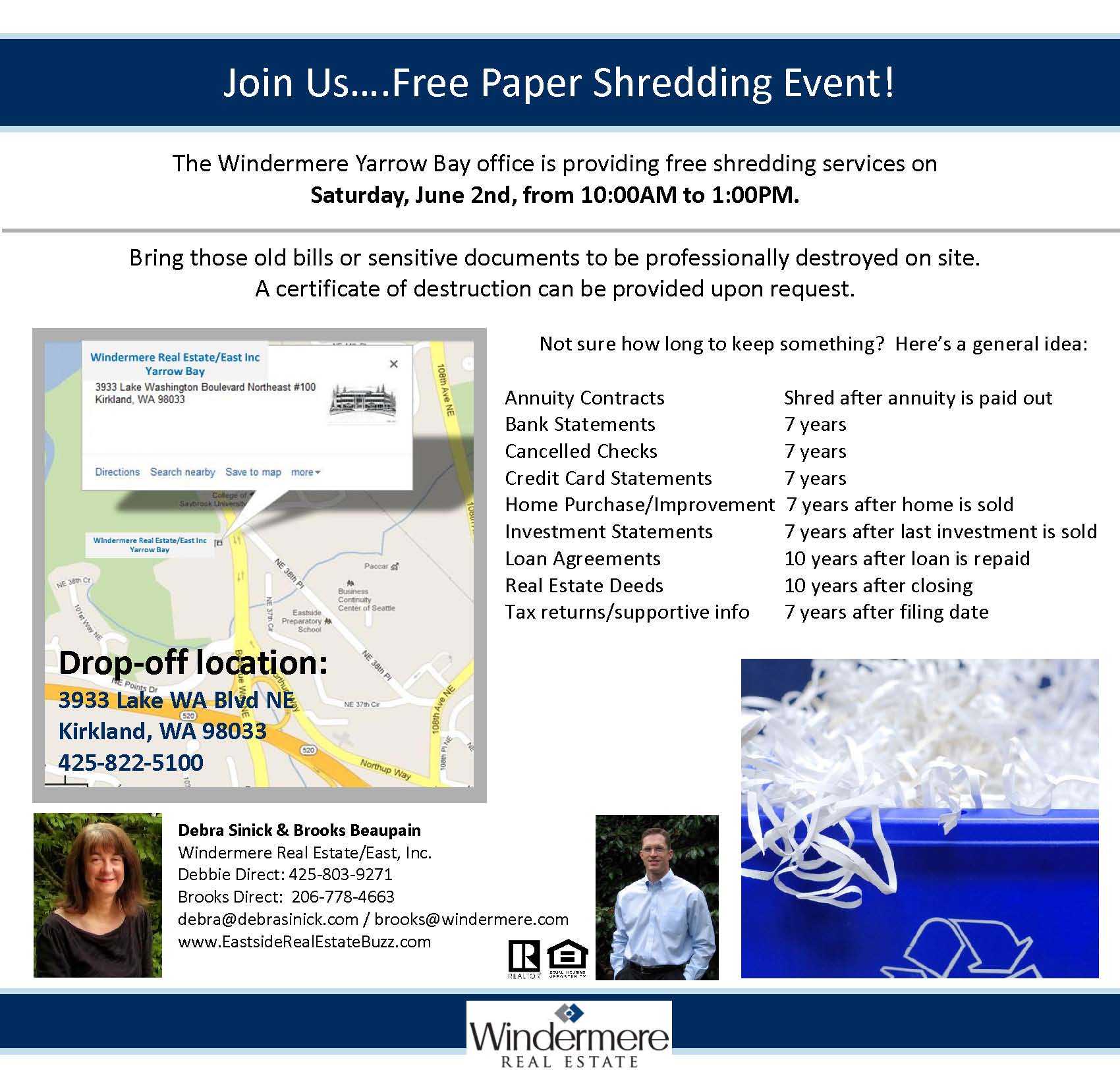 The water heaters, computers, scanners, modems, old bikes all came today to my Windermere/Yarrow Bay office in Kirkland. There was a steady stream of cars through the parking lot through the whole day.  More than 3 truck loads of “stuff’ was brought in and will be recycled.  Way to go!  None of the “stuff” will be thrown in a landfill.

Thank you for bringing your “stuff” and not dumping it.  Thanks to 1 Green Planet for a job well done.  What a great way to start the year!

Got Junk?  This Sunday you’ll have an opportunity to start the new year right by unloading some of your unwanted electronics, appliances and other good stuff at my Windermere Real Estate office in Kirkland.

I missed a recycling event in Kirkland, so my husband and I took our stuff down to 3RRecycle in Seattle back in the fall.  They did a good job for us, but it’s nice to be able to get rid of your “stuff” responsibly and quickly right here on the eastside.  1 Green Planet will also take your stuff if you can’t make it on Sunday. They’re located at the above address in Issaquah.

By the way, if you know of other recycling events throughout the year, please let me know about them as I’m happy to post your event on this blog.  Happy recycling.

He’s gone.  They carted him away today after our very long relationship, a longer one than I’ve had with my husband.  He’s always been a little chilly, in fact, downright cold. But he was faithful, always ready, and never needed any fixing.  He moved with me from an apartment to two homes, from the east to the west coast, never complaining.  We went through many a family dinner, holiday extravaganza and party over the years.  He’d always been responsible for the food.

He showed evidence of aging over the years, just like we all do. There were the spills that occasionally needed to be cleaned off him.  Some bumps and scratches were noticed here and there, but overall, he was a healthy specimen.  It’s been hard to let go of him because he’s been working so loyally all these years.

I made the phone call to end our relationship.  They came to get him on Friday afternoon.  He was ready and waiting for them to take him away. After so many years, it was over in a matter of minutes.  Out the door and up the driveway he went.

The Puget Sound people left me with more information about the program:

Want more information about using energy wisely?  The PSE website has a lot of great tips.

I took a great class this week to learn more about sustainable living, “green” living as you will, so I’ll write about what I’ve learned.  I’ll also write about what I’m doing to make some important changes in the way I live.  My goal is to reduce my carbon footprint and save some money, too!

A hat tip to Marlow Harris for posting a link to the PSE energy program on Facebook.  By the way, check the site to find out all the details and any restrictions.

What are you doing to reduce your carbon footprint?

I Need to Learn How to Reduce My Carbon Footprint

I have a big, fat carbon footprint! I’m surprised and I’m not happy.  I took a survey to determine my carbon footprint and found out that it takes over 30 acres to support my lifestyle. If everyone lived the way I did, it would take multiple planets to support all the people on earth!  Very humiliating and disappointing.

I recycle as much as I can. I recycle a lot, in fact. My recycle bin is overflowing every week and my trash barrel holds just a small bag.  I don’t eat much meat.  I prefer fish and chicken.  I don’t drive a lot, except for work. (Driving is a hazard of my profession.) I have many reusable bags.  I rarely use paper bags.  I unplug electrical appliances.  I use CFL’s. I turn my lights out regularly.

So where have I gone wrong?  Why wasn’t my carbon footprint score better? I have a few theories for things I can do better, but I plan to learn and do more.  Over the next few days, I’ll be attending a class put on by the Earth Advantage Institute from Portland, Oregon.  The class is Sustainable Training for Accredited Real Estate Professionals, S.T.A.R.  The group got off to a good start by sending out a list of all the class attendees hoping we would hook up to car pool.  Wouldn’t it be great if people and organizations did that for all their meetings, classes, etc.?  Such a simple idea, but one most of us don’t take time to consider.

I’ll share what I learn, because if I have a poor carbon footprint score, I imagine a lot of us do.  Stay tuned!  By the way, take the survey and see how you do.  You may be surprised.